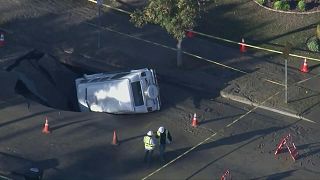 A massive sinkhole nearly swallowed up a parked van in after it opened up due to a water main break, local authorities said.

It occurred in Los Angeles, California and was reportedly not the first time a sinkhole had opened in the area, local news reported.

A sinkhole is hole in the ground typically caused by some form of collapse of the surface layer. They can vary in shape and size and may develop gradually or suddenly.

There was no one in the parked van at the time, local news stations reported.