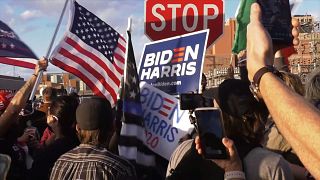 Hundreds of Donald Trump supporters gathered outside a vote counting centre in Arizona on Saturday as news organisations reported Joe Biden had won the US presidential election.

A number of Biden supporters also took to the streets, with those from both sides seen waving flags and banners and shouting slogans, with some even closely confronting each other.

Trump's supporters repeated his claims of fraud and many of them armed, they denounced the recognition by news organisations of Biden's projected victory.

They also claimed that many votes are illegal and accused media outlets at the site of spreading fake news. There is no evidence to support these claims.

Meanwhile, Biden supporters said they came to challenge the hateful behaviour on display by Trump supporters, and criticised their continued spreading of false information.