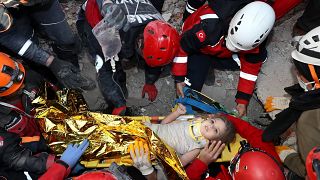 Rescuers in the Turkish coastal city of Izmir pulled a three-year-old girl out alive from the rubble of a collapsed apartment building on Tuesday, four days after a deadly earthquake hit Turkey and Greece.

Her rescue came a day after another two girls, one three and another 14, were also pulled out alive from collapsed buildings in the city.

Ayda had been trapped under the rubble for 91 hours since Friday's quake struck in the Aegean Sea.

The US Geological Survey rated the quake at 7.0 magnitude, although other agencies in Turkey recorded it as less severe.

The vast majority of the deaths and nearly 1,000 injuries occurred in Izmir.