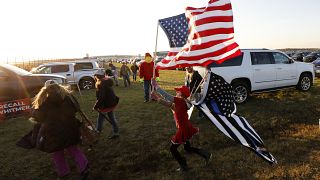 Democratic voters line up in their cars to attend a drive-in election eve rally held by former US President Barak Obama in Miami, Florida, one of the key swing states in Tuesday's presidential election.

In one of US history's great political gambles, Biden has stuck to these kinds of socially distanced gatherings with small crowds of people segregated in their cars right up to the last moment -- in contrast to Trump's constant, large rallies where few supporters so much as bother with masks.

The Democrat clearly feels that his calmer approach and strict attention to pandemic protocols is what Americans want after four tempestuous years.

Meanwhile, Trump flew to five rallies in four swing states - including one at Grand Rapids, Michigan - hammering home the dark message that his Democratic opponent will bring anarchy and alleging that attempts are being made to rig the result against him.

The choice of Kenosha for his penultimate rally underlined his push to make right-wing anger over nationwide anti-racism protests a keystone of his campaign.