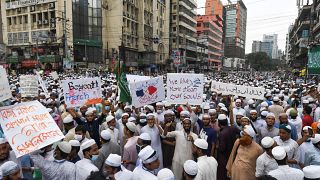 Thousands take part in anti-France rallies in Bangladesh and Indonesia

Tens of thousands of Muslims marched in the capitals of Bangladesh and Indonesia to protest against Emmanuel Macron's support for caricatures of the Prophet Muhammad.

In Dhaka, they chanted slogans such as "Down with France", "Boycott French Products" and burned effigies of the French president.

Meanwhile in Jakarta, more than 2,000 demonstrators many wearing white Islamic robes, filled a major thoroughfare in the Indonesian capital. The protesters chanted "God is Great" and "Boycott French products" as they marched.

Smaller protests took place in other Indonesian cities, including in Surabaya, Makassar, Medan and Bandung.

After the brutal killing of French teacher Samuel Paty near Paris, Macron defended freedom of expression: "We will not give up caricatures and drawings, even if others back away", calling for an end to hatred and violence and for respect for others.