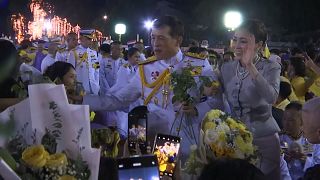 Thailand's King and Queen met with supporters in Bangkok on Sunday after attending a religious ceremony.

Thailand's King and Queen met with supporters in Bangkok on Sunday after attending a religious ceremony.

The monarchs, under increasing pressure from protesters demanding reforms to the monarchy, greeted royal devotees who waited for hours inside the white walls of the palace compound to great them.

As the smiling royal couple emerged, members of the crowd shouted “Long live the King!” and kissed the monarch’s feet as the couple passed, several wiping them with a towel.

It came after another week in which student-led protests called to shake up the powerful royal institution.

The student-led protesters say that the palace exercises too much power for a constitutional monarchy.

The demands to reform the monarchy have shattered a taboo in a way that would have seemed unthinkable just a few months ago.

THAILAND MONARCHY ADORATION OF THE KINGS
Now playing Next
no comment