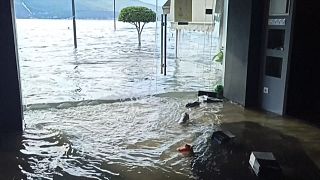 Video showed heavy flooding on the streets in the island. Greek public media reported there was a mini "tsunami" that impacted the island.

People rushed to the streets in panic and the Greek civil protection agency told Samos residents in a text message to "stay out in the open and away from buildings".

Greece's Special Department for Medical Disaster (ETIK) confirmed that two children had died on the island, in the town of Vathi.

"The two children, shortly after the earthquake were leaving their school. As they were passing a narrow street of the city, a wall from an old building collapsed and crushed them," emergency services wrote on Facebook.

In Greece, the last deadly quake killed two people on the island of Kos, near Samos, in July 2017.