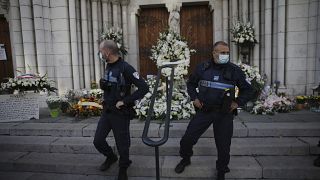 Mourners lit candles and prayed outside Nice's Notre Dame basilica to honour the three churchgoers were killed in a suspected terrorist attack.

It comes as France heightened security nationwide amid religious and geopolitical tensions around cartoons mocking the Prophet Muhammad.

Four soldiers with rifles periodically walked past the church as people came to pay their respects to the victims.

They included 55-year-old Vincent Loques, a father of two who was the church's sacristan, in charge of its holy objects, according to local broadcaster France-Bleu.

Another was a 44-year-old mother of three from Brazil, according to Brazil's Foreign Ministry.

The attack suspect was seriously wounded by police and hospitalised in a life-threatening condition, authorities said.

French authorities called the attack "Islamist terrorism" and prosecutors in France and Tunisia are investigating.