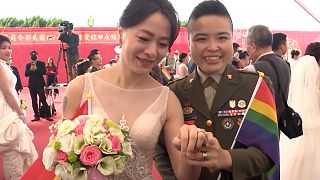 Nearly 200 couples paraded at an army base in northern Taoyuan county before exchanging vows at an outdoor ceremony.

Among them were two Taiwanese female soldiers and their civilian same-sex partners, a first for the island's armed forces which regularly hosts mass weddings for staff.

Major Wang Yi, 36 and her partner Yumi Meng waved rainbow flags as they posed for photos with family in front of an armoured vehicle.