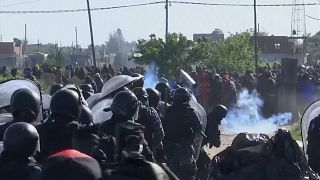 Clashes broke out in an illegal land settlement occupied by squatters on the outskirts of Buenos Aires on Thursday as residents and demonstrators resisted an eviction by hundreds of heavily armed police.

Following the knocking down and burning of hundreds of makeshift houses that have been haphazardly erected in the plot in Guernica in recent months, former residents and demonstrators hurled rocks and other objects at the authorities, who responded with tear gas and rubber bullets.

Close to 600 families have been illegally occupying the area of almost 100 hectares since July.

Earlier attempts to have them evicted were overturned by authorities, with the police raid following months of failed negotiations between the occupiers and the government.

Hundreds of heavily armed police arrived at the area at approximately 5 a.m. local time (2 a.m GMT) on Thursday morning to begin the eviction.

The community has become emblematic of a worsening economic situation which has led many to poverty in the last year.

The government of Alberto Fernández blames the recent increase in poverty to a combination of long-standing bad economic conditions, and paralysis generated during a lockdown to prevent the spread of coronavirus.