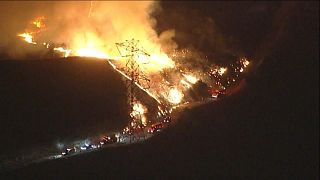 Fierce winds that drove twin fires through brushy hills near cities in Orange County a day earlier were expected to pick back up, although not to the earlier extremes, according to the National Weather Service.

Electricity firm Southern California Edison reported to regulators that it was investigating whether its equipment might have sparked the Silverado Fire near the city of Irvine. The utility said a wire that lashed a telecommunications line to a supporting cable may have struck a 12,000-volt conducting line above it.

Edison was among the utilities in California that deliberately cut power to customers to prevent equipment from being knocked down or hit with debris in the winds and sparking wildfires. Utility equipment has been blamed for several destructive fires in recent years.

Irvine residents had to evacuate after the fire broke out early Monday, while later and a few miles away, another blaze, the Blue Ridge Fire, sent people fleeing from the Yorba Linda area. One home was reported damaged.

Forecasts call for Santa Ana winds topping 50 mph (80 kph) at times over much of Southern California, with some of the strongest gusts howling through Orange County, where the major fires are.