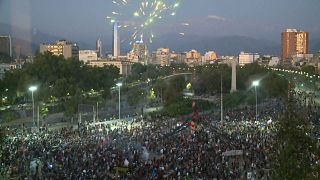 The result set off wild celebrations across the capital and other cities after voters turned out in droves to throw-out the constitution left by the regime of 1973-1990 dictator Augusto Pinochet.

Thousands of people flocked onto the streets of Santiago amid a cacophany of horn-blaring to celebrate victory for the "Approve" campaign within minutes of the polls closing.

"I never imagined that us Chileans would be capable of uniting for such a change!" said a jubilant Maria Isabel Nunez, 46, as she walked in the crowd hand-in-hand with her 20-year-old daughter.

With more than half the votes counted, the "Approve" campaign had amassed 77.9 percent of the vote, with the "Reject" campaign polling just 22.10 percent.

Acknowledging the result, President Sebastian Pinera called on the nation to work together for a "new constitution" in a speech broadcast from his Moneda Palace surrounded by his cabinet.

"This plebiscite is not the end, it is the beginning of a path that we must all walk together to agree on a new constitution for Chile," Pinera said.

"Until now, the constitution has divided us. From today we must all work together so that the new constitution is the great framework of unity, stability and the future."