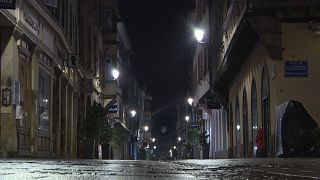 Strasbourg bar owners expressed their frustation over the new coronavirus restrictions, following the extension of France's curfew to the city on Friday.

The city's bars emptied out at midnight when the new restrictions came into effect, leaving business owners concerned with the financial impact the 'second wave' might have on their livelihoods.

France is the latest European nation to surpass one million confirmed virus cases.

Prime Minister Jean Castex said a curfew ordered last week in eight departments, including Paris and its suburbs, was being extended to more regions starting Friday at midnight.

The latest extension means that 46 million people among France's population of 67 million will be under curfew.

The curfew will take place daily from 9pm to 6am local time.

Although the virus has been spreading less rapidly during this 'second wave', it has been more extensive, the prime minister explained.

He added that the situation was "grave".

The number of cases of COVID-19 have doubled in France in the past 15 days.

More than 34,000 people have died in the country since the start of the pandemic, one of the highest death rates in Europe.