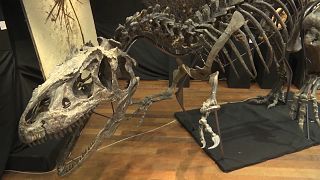 A rare fossilized skeleton of an Allosaurus - ancestor of the T-Rex - was bought at auction for over €2.5 million in Paris on Tuesday.

The total amount paid by the buyer, whose identity and location weren't disclosed, was over €3 million ($4 million) with purchasing fees, Drouot auction house said.

The remains of the 150-million-year-old dinosaur from the Upper Jurassic period were found at a ranch in Wyoming, USA in 2016.

The structure was fairly intact as more than 70% of the skeleton put up for auction is made from the creature's real fossilized bones, skull, teeth and claws.

The reconstructed Allosaurus measured 10 metres long and 3.5 metres high - one of the largest known to date.

It was initially thought that the fossilised skeleton would fetch between €1 and €1.2 million euros.