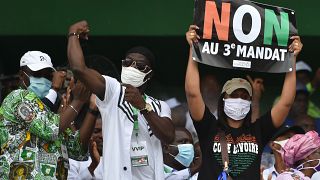 Opposition leaders and supporters in Ivory Coast gathered at a stadium in Abidjan to reject a third mandate of Alassane Ouattara, the current president of the country who is running for another term in office.

The opposition supporters, who came from different cities to the Felix Houphoubet Boigny stadium, carried banners reading "Civil disobedience. No to the denial of justice," denouncing a "violation of the Constitution".

Last month, members of the opposition called for civil disobedience to protest Ouattara's quest for a third term, which his critics consider unconstitutional.

The declaration ahead of the Oct. 31 vote raises the specter of unrest in a country already scarred by post-election violence in 2010-2011 that left more than 3,000 people dead.

Opposition figures put their differences and joined forces to form a unified front against Ouattara.

Henry Konan Bedie, head of the PDCI-RDA (Democratic Party of Ivory Coast – African Democratic Rally) and former president of the country, told the crowd that the "dictatorship" of ruling party RHDP (Rally of Houphouetists for Democracy and Peace) will be defeated.

Ouattara has been in power for nearly a decade. After his heir-apparent died unexpectedly, the incumbent president said he would run for a third term.

Ouattara insists that his first two terms do not count toward term limits because Ivory Coast has approved a new constitution.

Opposition activists want Ouattara disqualified from the election. But the country's Constitutional Council already has validated his candidacy.

The opposition wants that council dissolved, along with the Independent Electoral Commission.