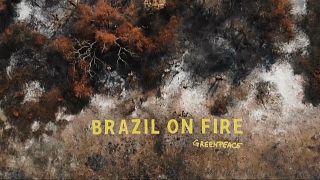 The statue was erected in the burnt wetlands of Pantanal, in Brazil's Mato Grosso do Sul region.

Twelve per cent of the Pantanal wetlands — the world's largest wetlands and a UNESCO heritage site — was devastated between January and August 2020.

The region has been suffering from a historic drought which makes fire particularly difficult to control and the accelerating, illegal, deforestaton of the area is compounding the issue, Greenpeace said.