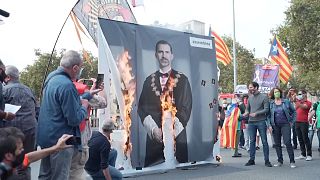 Hundreds of Catalan separatists protested the visit of Spanish King Felipe VI and Prime Minister Pedro Sánchez to Barcelona on Friday amid continued tensions between the restive region and national authorities.

Police set up roadblocks around the train station where the monarch and prime minister attended the Barcelona New Economy Week innovation awards.

The visit by Spain's head of state and government comes less than two weeks after Catalonia's regional chief, Quim Torra, was removed from office by Spain's Supreme Court.