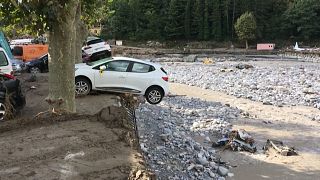 Watch: Cars and houses buried by mud as France battered by storms

Cars and houses were entombed in mud in Breil-sur-Roya, a French town close to the Italian border, two days after torrential rains and floods hit the south-east of France.

A family urgently emptied their house by the Vésubie river in Roquebillière which threatened to collapse at any time.

"I feel like I'm still living in a nightmare," says a resident of Roquebillière, in the Alpes-Maritimes, in France, after storms lashed the area.