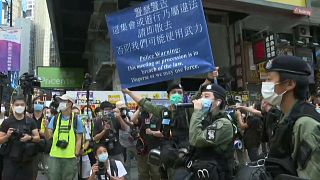 Thousands of police officers stood by in Hong Kong, ready to stop any mass demonstrations during National Day celebrations.

Last year clashes broke out between protesters and police during the event, but China has since imposed a security law that has mostly quelled dissent.

The People's Republic of China celebrates its founding on October 1 with a carefully choreographed holiday and festivities.

But in Hong Kong, it has become a day of grievance for those concerned about the intensification of Beijing's authoritarian crackdown on its opponents.

On Thursday morning, Chinese and Hong Kong-flagged helicopters buzzed into the port as Lam and top mainland Chinese officials attended a ceremony surrounded by police and security barriers.