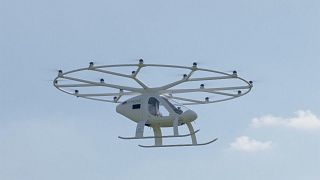 Could new electric 'air taxi' be the future of travel?

German company Volocopter unveiled its newest prototype — the electric "air taxi" — at an airport near Paris.

Pegged as a transport method of the future, its designers say the Volocopter, a driverless, flying taxi, will revolutionise how we travel in cities.

The aircraft, known as an eVTOL (Electric Vertical Take-off and Landing), was designed to transport people through cities and urban environments.

The aircraft runs on nine electric batteries and can carry a pilot and a passenger.

The Volocopter will be tested from June 2021 at Pontoise airport near Cergy, 35km west of Paris.

If next year's tests are conclusive, Paris authorities hope to have a prototype ready for demonstration flights during the Paris Olympics in 2024.