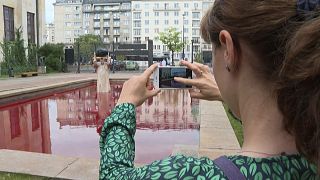 An unusual sculpture depicting Pope John Paul II holding up a meteorite was unveiled in Warsaw on Thursday -- an artistic response to a controversial statue showing the rock striking down the late pope.

The installation has already prompted online derision and criticism from art commentators who said it simply reflects the ultra-Catholic outlook of Poland's populist government.

One image shared on social media transforms the statue into a depiction of a plane passenger trying to put a suitcase into an overhead compartment, while another showed people fleeing the advance of a giant version of the statue.