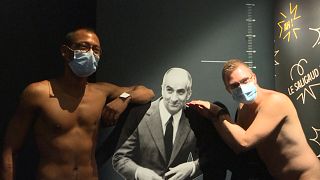 Parisian nudists descended upon the city's film library on September 13 for an exhibition celebrating a famous French comedian.

With COVID-19 protection measures in place, the only mandatory accessory was a mask.

The Association des Naturistes de Paris (Paris naturist association) organised the event at La Cinémathèque, reserving a time slot for its members between 9.00 am and 11.30 am.

The exhibition was in honour of actor Louis de Funès who played police officer Ludovic Cruchot in 60's French comedy film "the troops of St Tropez".

The film sees Cruchot try to chase down a group of naked swimmers who manage to get away from the officer.

Founded in 1953, the Paris naturist association has organized regular visits to museums.

La Cinémathèque said the event was "a first for the Parisian institution", according to AFP.