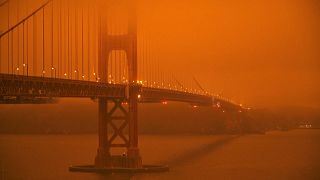 People in San Francisco and elsewhere in California woke Wednesday to a deep orange sky that triggered apocalyptic visions in a year already rife with disturbing events.

Skies so dark at times that it appeared more night than day were accompanied in some places with ash falling like snow due to the massive wild fires filling the air with smoke and cinders, and blocking out the sun.

Photos of the eerie scene, particularly of a San Francisco skyline fit for a dystopian science fiction film, spread quickly on social media.

Others likened the scenes to planets other than Earth.

Dark skies blocking the sun chilled temperatures at what has historically been the warmest time of year in San Francisco.

In California, where at least eight deaths have been reported, National Guard helicopters rescued hundreds of people trapped by the Creek Fire in the Sierra National Forest.