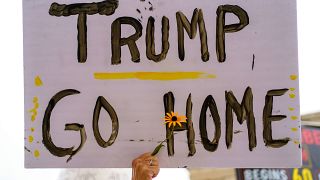 Donald Trump took his tough law and order election message to Kenosha, the latest US city to be rocked by the police shooting of a black man, Jacob Blake.

Crowds lined the barricaded streets where the president's motorcade passed, with Trump supporters on one side and Black Lives Matter protesters on the other, yelling at one another from a distance and in sometimes tense face-to-face encounters.

"Thank you for saving our town," read the sign of one supporter along the road. "Not my president," read another.

Under heavy security that blocked off the road, Trump visited a burned-out store where he told the owners "we'll help you rebuild".

But Trump did not meet with Blake's family, who held a “community celebration” on Tuesday at a distance from Trump’s visit.

“We don’t need more pain and division from a president set on advancing his campaign at the expense of our city,” Justin Blake, an uncle, said in a statement. “We need justice and relief for our vibrant community.”