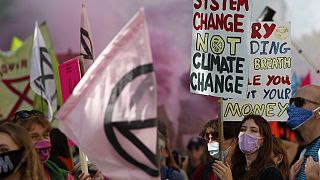 Hundreds of demonstrators converged on Parliament Square in the heart of the UK capital to make their voices heard.

Some activists sat in the middle of the road next to Parliament Square, stopping traffic. Dozens of police officers swooped in to carry them away to vans parked nearby. The protests saw 65 people arrested, police said.

The action, organised by Extinction Rebellion, is the first of several protests planned for the coming days in London, Cardiff and Manchester.