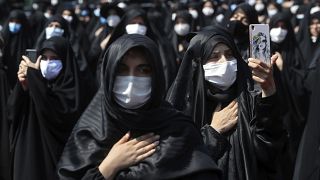 Mourning and masks: Shiites in Iran mark Ashoura amid COVID-19

Shiite Muslims in Iran observed the solemn holy day of Ashoura on Sunday in the shadow of the coronavirus pandemic.

The country has recorded the largest number of virus-related deaths in the region and authorities only allowed limited mourning rituals to take place, with those involved urged to keep their distance.

Ashoura commemorates the seventh-century killing of Imam Hussein, the grandson of the Prophet Muhammad, in the Battle of Karbala in present-day Iraq by the army of the Caliph Yazid, to whom Hussein had refused to pledge allegiance.

The Day of Ashoura falls on the 10th of the Islamic month of Muharram and is preceded by days of commemorations and remembrance.

Iran has so far reported 373,570 confirmed virus cases and 21,462 deaths, according to a running tally kept by Johns Hopkins University.