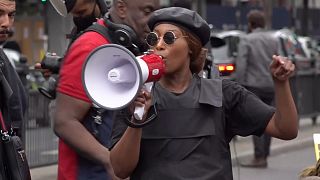 People were lying on the street and blocking traffic.

Protest organiser Ken Hinds said the demonstration was to highlight racial injustice in the UK and to denounce upcoming government spending on prisons.

"What kind of society are we if we can project that we need so much prison spaces? Why can't we turn that into university spaces by investing in communities so we can get ahead of that predicted curve?" he asked.

The "Million People March" was held in lieu of the annual Notting Hill Carnival, which will air online this year due to coronavirus restrictions.

Organisers said the protest is more important than ever amid the worldwide campaign for justice after Black man George Floyd died in police custody in Minneapolis in May.