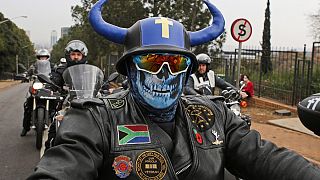 Thousands of bikers across the country have converged at the Union Buildings in Pretoria in protest against farm attacks and racism in South Africa.

Dozens of predominantly white farmers are killed in crime-plagued South Africa every year, and police statistics show that 49 murders occurred on farms in the 12 months leading up to April.

Wearing face masks and with placards plastered to their vehicles, the protesting farmers drove in a long convoy which is about 220 kilometres (135 miles) north of Johannesburg.

A small group of farmers, including children, stepped out of their vehicles and held up their arms crossed in an "X", symbolising their call for an end to the attacks.

AfriForum, a pressure group that advocates on behalf of the country's nine percent white population, said 216 attacks have been recorded so far this year, 26 of which were murders.

The group said the assaults and murders are not only targeting whites, but also black people and Indians.