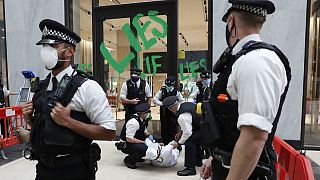 At least one protester was arrested after demonstrators representing climate advocacy group, Extinction Rebellion, gathered outside Shell Centre, the London headquarters of the major oil firm, and spray-painted the word "LIES" on the building entrance.

The activist group had planned the demonstration for early Friday but minutes into the protest the graffiti painter, a young woman wearing a white painter's uniform with the XR logo on the back, was arrested by police.

Police remained on the scene following the arrest, standing guard in front of the building entrance.

Extinction Rebellion has called on activists to 'flood the streets' of Britain in a series of mass-gatherings despite the risk of spreading COVID - as it plans a weekend of Bank Holiday activism targeting airports and cities.

A four-day 'regional rebellion' from tomorrow until Bank Holiday Monday will see protests across the UK, including in London, Manchester, Bristol, Cardiff and Leeds.

The environmental group has encouraged its protesters to take action locally with the aviation sector, banks, the fossil fuel industry and petrol stations as targets.

Protests this weekend are due to include roadblocks, marches, sit-ins, bike rides and picnics, with organisers emphasising their ethos of 'non-violent direct action'.