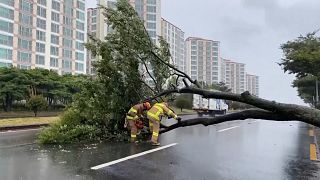 A typhoon that smashed South Korea, ripping off roofs and knocking out power to over 1,600 households, made landfall in North Korea early Thursday.

South Korean authorities said there were no immediate reports of casualties, and North Korea has not reported any damages.

Packing maximum winds of 133 kilometers (83 miles) per hour, Typhoon Bavi was barreling north and just 70 kilometers (43 miles) southwest of the North Korean capital of Pyongyang, after passing over a western coastal region known for fishing and other industries, South Korea's weather agency said.

South Korea's Ministry of the Interior and Safety said there was no immediate reports of casualties, despite damage to buildings, walls, roads and other structures.

The Korea Meteorological Administration warned that strong winds will continue in the Seoul capital area and the country's central region through the morning.

Power was knocked out in 1,633 South Korean homes, including 887 on the southern resort island of Jeju, which was the first part of the country to be hit by the typhoon on Wednesday, and more than 600 in mainland regions.

More than 430 domestic flights in and out of Jeju and the southern mainland city of Busan were canceled as of Thursday morning.

Dozens of makeshift coronavirus testing stations had been dismantled in the capital Seoul and other major cities out of concerns the tents and booths would not withstand the strong winds.