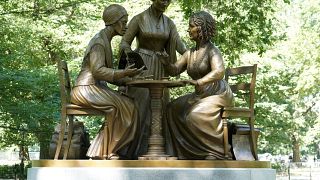 New York's Central Park has inaugurated its first statue honoring "real women," two of them white and one black, all of them pioneers in the struggle for women's rights.

In its 167-year history, the park has seen some 30 statues installed over its vast 840 acres (340 hectares). But they have honored only white men and fictional women -- like Alice in Wonderland at a tea party with the Mad Hatter, or a life-size statue of Juliet, in tender embrace with her Romeo, near the theatre that hosts Shakespeare in the Park.

On Wednesday, that "bronze ceiling" was shattered, former US secretary of state Hillary Clinton said at the statue's inauguration, which was streamed online.

The new statue represents Sojourner Truth (1797-1883), Susan B. Anthony (1820-1906) and Elizabeth Cady Stanton (1815-1902) -- campaigners for the rights of women and people of colour, gathered around a small table where they appear to be absorbed in intense discussion, "not dreaming but working," in the words of sculptor Meredith Bergmann.

Its inauguration comes a week after the 100th anniversary of the ratification of the 19th Amendment to the US Constitution, which gave women the right to vote.

None of the three women lived to see that day, but without them it likely would not have come when it did.

The statue sits alongside one of the park's most popular paths, the so-called Literary Walk, not far from statues of Shakespeare, the poet Robert Burns and the author, politician and historian Sir Walter Scott.

It represents the culmination of a seven-year effort, said Pam Elam, who heads the Monumental Women association, which fights for wider recognition of women's role in history.

"What we all seek is nothing less than a full and fair historical record ... that reflects the contribution of all women and people of color, and we won't stop until we win that," Elam said.

The road to the statue's inauguration has been anything but smooth, reflecting the intense debate in the US about the historic treatment of women and blacks.

That debate escalated sharply with the anti-racism protests that followed the death at police hands of George Floyd in late May, prompting the removal in some cities of statues honoring Confederate leaders, and even Christopher Columbus, linked to the enslavement or oppression of minorities.

The original plan for the statue included only Anthony and Stanton, both white women, prompting criticism that it neglected the historic role of black women.

So planners added Sojourner Truth, a prominent abolitionist who once delivered an impassioned plea for women's rights now famous as her "Ain't I a Woman?" speech.

Statues of women are rare not just in Central Park but all around New York. City officials have committed themselves to dedicating more monuments to women.

An early beneficiary of that effort will be Shirley Chisholm (1924-2005), a Brooklyn native who in 1968 became the first black woman ever elected to Congress: her statue is slated to be completed by the end of this year and be installed at that borough's large Prospect Park.