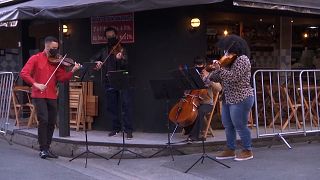 Musicians have been trying to lift spirits in COVID-hit Brazil.

They played in Sao Paulo's largest favela, Heliopolis, which is home to more than 200,000 people and has been badly affected by the virus.

The musicians, from Heliopolis, are part of the Baccarelli Institute, a non-profit organisation that has been promoting the social inclusion of children and young people in the community.

While the string quartet played, residents returning from work stopped to listen on the street or from their windows and balconies.

"Everybody that passes is amazed," said Luis Fernando Lopes, a 30-year-old Heliopolis resident.

The Baccarelli Institute tries to extend access to such music and performances to those in poorer areas and musician Palloma Izidio is an example of its success.

Coming from a low-income family, she moved to Heliopolis aged 17 to be able to study music.

The institute closed due to the pandemic but started holding online masterclasses with renowned international musicians.

In one of the masterclasses, a musician from Belgium heard Izidio playing and after several tests, she was admitted to one of the European country's prestigious music schools.