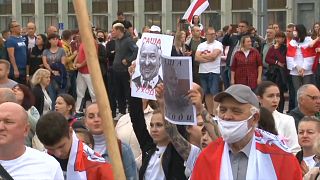 A sea of red and white flags flooded the streets of Minsk on Sunday as thousands of protesters call on the country's longtime ruler, President Alexander Lukashenko, to step down.

The demonstrators occupied the city's central square and then took to the main avenue chanting slogans such as "Go away" and "Long live Belarus".

Belarus has been in turmoil since the elections on August 9 that handed a landslide victory to Lukashenko, but which the opposition claims was rigged.

Officials issued a warning to Belarusians against participating in "illegal demonstrations".

But police have made no attempt so far to stop the protest, in contrast to their violent suppression of protests in the first few days after the election result was declared.