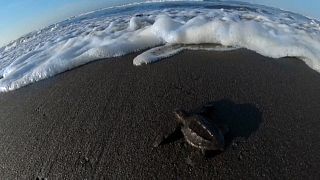 The hatchlings take off down the beach until they get lost in the waves in a cycle that repeats itself between July and November each year during the nesting season off the Guatemalan coast.

But the protection of the species has been jeopardised by the restrictions imposed on counting the COVID-19.

Arnulfo, who wears a mask, told AFP that night curfews and other restrictions on movement to prevent the spread of the coronavirus have prevented authorised residents from carrying out controlled egg collections, a key part of preservation.

"The curfew has affected them a lot because they no longer have time to walk on the beach" looking for turtle nests, which is done mostly at night and in the early morning, says the ranger at Sipacate-Naranjo National Park, 90 km south of the capital on the Pacific.

Since March, the Guatemalan government has been enforcing mandatory confinement to curb the pandemic, mainly by banning people from going out at night.

Although it has relaxed some measures to reactivate the economy, it maintains the curfew which is in force from 9 pm to 4 am the following day (3 am to 7 am GMT).

The state-run National Council of Protected Areas (CONAP), in charge of preserving marine species, allows residents to collect the eggs, which are sold for consumption in local markets, under the condition that they deliver 20% to be "planted" in special enclosures for turtles.

The collectors "are important for conservation," explained Vásquez, in charge of the turtle farm in the Naranjo village of Sipacate, part of the reserve with 20 km of beach.

During the past nesting season, Conap counted a planting of 513,009 eggs on all of Guatemala's beaches with the release of 475,327 sea turtles, a hatching percentage of 92%.

According to the entity, six of the eight species of sea turtles that exist in the world lay their eggs on Guatemalan beaches every year.

However, this year the impact on turtle nesting "will be negative" due to the pandemic, warned CONAP in a report provided to AFP.

CONAP believes that without controlled harvesting, "natural" nests run the risk that the eggs will be lost in their entirety to predators like domestic animals, in addition to being exposed to solar radiation that raises the temperature to the extreme of "cooking" them.

Carlos Velásquez, the park's administrator, says that experience has allowed them to establish that the percentage of hatchlings in the nests that remain on the beaches "is unfortunately very low".

On the contrary, the official maintains that in the turtles in the reserve under his care, they have had "gusts" of up to 56,000 protected eggs per year, with only a 2% failure rate, by providing a controlled environment of humidity and temperature to cause the birth of the turtles, a process that takes between 45 and 50 days.

Velasquez adds that they are currently holding conversations with other government authorities so that permits can be extended to collectors registered with Conap so that they can "patrol" the beach and carry out the collections.

In front of an enormous and colourful mural about the reptile reproduction cycle in the El Paredón village turtle farm, the expert said that the scarce influx of tourists has also affected the conservation process, after hotels in the area have suspended their turtle release programs that were attracting visitors.

Guatemala, a country of about 17 million people, has recorded nearly 63,000 cases of coronavirus in the past five months, including more than 2,300 deaths.