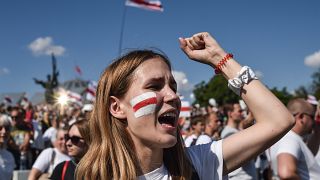 Tens of thousands of anti-government protesters gather in Minsk

Tens of thousands of anti-government protesters gathered in the centre of the Belarus capital Minsk on Sunday as part of a freedom march.

Participants were contesting the results of presidential elections last week that handed a sixth term to authoritarian ruler Alexander Lukashenko.

Much of the crowd gathered near Victory Park in Minsk, carrying flags and banners, before marching through the city's streets.

Similar marches were reported in other large cities across Belarus. The protesters chanted "leave" and "long live Belarus."

Many observers said it was likely the largest protest in the country's history and came hours after Lukashenko addressed supporters in another part of Minsk.