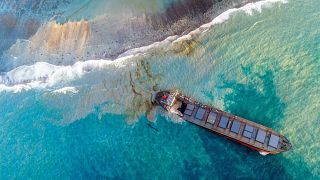 The ship has been leaking fuel in the past week into the blue waters of the Indian Ocean.

Local authorities tried to pump out its remaining oil and fuel in fear it would break up.

Almost all the fuel oil from the Japanese-owned ship had been pumped out, according to Prime Minister Pravind Jugnauth.

Authorities in Mauritius declared a “state of environmental emergency” last week while residents from across the island have rallied, making floating barriers out of a straw in an effort to contain the spill.

The MV Wakashio ran aground off Pointe d'Esny with thousands of tonnes of oil on board. The hull is reported to have breached due to bad weather and waves, with oil reaching the shore.