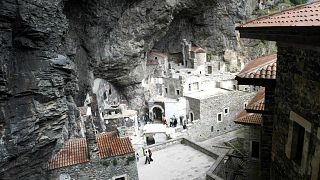 Sumela monastery opens for the 'Ascension of the Virgin Mary' mass

The Sumela Monastery is located in Macka district of Turkey’s Black Sea province of Trabzon.

Only around 50 people attended the mass due to COVID-19 restrictions.

The monastery was reopened in 2010 for Christian Orthodox masses, to be held once a year.

Sumela was closed to visits in September 2015 due to the potential risk of rocks falling. For the past 4 years, masses were not held due to ongoing restoration works.

Sumela Monastery, located 300 metres above the forests that cover Altindere Valley in the northeastern province of Trabzon, is known locally as "Meryem Ana" (Virgin Mary).

Most parts of the monastery were renovated in the 18th century and some walls were adorned with frescoes.

The addition of large buildings in the 19th century brought the structure to its contemporary form and experienced the richest era of its history.