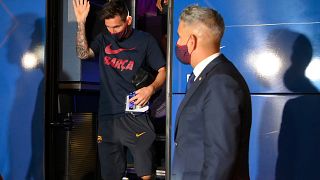 Bayern Munich scored eight times against Barcelona as the German side inflicted a record defeat on the Catalans.

On a humiliating night in Portugal for Barcelona, Bayern became the first team to score eight goals in a Champions League knockout match, while Barca conceded eight in a match for the first time since 1946.

When Barcelona players arrived at their hotel in Lisbon, fans were seen booing them, some of them chanting "shame".