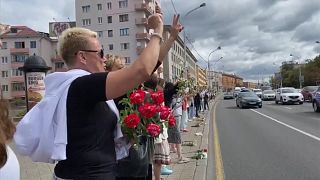 In one area of Minsk, women carried flowers and formed a "line of solidarity" along a busy road in a peaceful protest.

Thousands of people have rallied all across Belarus since Sunday, demanding a recount of the ballot that gave President Alexander Lukashenko a landslide victory with an unlikely 80% of the vote.

Police officers who were deployed to break up the post-election protests had been seen using batons, stun grenades, tear gas and rubber bullets.

At least one protester has died in Minsk and scores of others have been injured since Sunday.

Some 6,000 people have also been detained this week, according to the Interior Ministry.