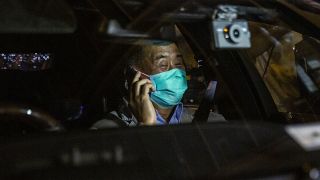 Hong Kong pro-democracy media mogul Jimmy Lai was released on bail, more than a day after he and other China critics were rounded up by police.

It comes as part of an increasing crackdown on dissent in Hong Kong since China imposed a sweeping security law in June.

Lai was among ten people detained under the new security law on August 10 as around 200 police officers searched the newsroom of his tabloid, which is critical of Beijing.

People in Hong Kong rushed to buy Tuesday's Apple Daily in a display of solidarity for Lai.

Lai's arrest sparked a buying spree in shares of his media group, and between August 10 morning and closing time on August 11 its stock value had risen by more than 1,100 per cent.

Lai, 71, was held on charges including colluding with foreign forces and fraud.