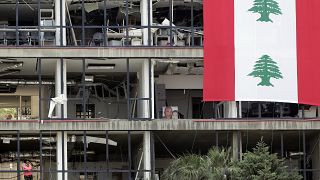 When a large fire broke out causing an explosion at the Beirut port, near his workplace, Shady whipped out his phone and started filming. But he had no idea an even bigger explosion would follow, one that would disfigure the city, killing 171 people and wound more than 6,000, dealing a sickening blow to a country already in crisis.

Shady sustained major injuries and more than a week later, his face and forearms bear impressive scars. "God gave me another life, a second chance. I don’t want to live it here," he tells AFP in an interview, after rewatching the cataclysmic moment that he caught on camera.

Tanya can't be alone in a room, while Carla, for days, thought a war was starting. Survivors of Beirut's August 4 blast are still in shock over a disaster that disfigured their city.

Almost every generation in Lebanon has experienced some kind of conflict, whether the 1975-1990 civil war or the 2006 hostilities with Israel.

Those episodes are over, but for some, the traumas they left are still vivid -- and last week's explosion has added yet another scar to the collective psyche.

Carla was on her balcony in an old Beirut neighbourhood when she felt her building shake.

"I initially thought it was an air raid because I associated the noise with what I remembered from the 2006 war," the 28-year-old told AFP.

After the explosion pulverised her windows, she rushed to the stairwell, petrified.

But before Carla could pull herself together, her elderly neighbour, who had survived the 1975-1990 civil war, was already busy sweeping the floor.

"This is a reflex from the war, whenever something breaks they just sweep it up," Carla said.

She is now staying with her family and said she is not emotionally ready to move back to her blast-hit home.

Even at her parents' house, she cannot sleep.

Tanya, 32, was in central Beirut when the explosion tore through buildings around her.

"The first two days I was constantly crying," the accountant said.

"But something inside was telling me: what are you crying about? I am safe, my family is safe, our house is safe."

But the mother of two said she also felt "guilt for surviving."

She said she didn't remember much from the moment of the blast, but the bruises on her body remind her of what happened.

Now, she is too scared to be alone.