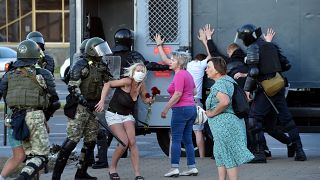 Police in Minsk detained dozens of people in an attempt to clamp down on demonstrations following the disputed election in Belarus.

Demonstrations have been taking place on a nightly basis since the election, which the opposition branded a "sham."

Several journalists have been injured and some were detained by police, with police seizing memory cards from a group of photographers, including an Associated Press photographer, as they were documenting clashes between police and protesters.

At least one protester died amid clashes in Minsk and scores were injured as police used tear gas, flash-bang grenades and rubber bullets to disperse them.

EU foreign policy chief Josep Borrell warned that the bloc is mulling action against those involved in the police crackdown.

Borrell said the elections "were neither free nor fair,” and called on Minsk to begin a dialogue with society to avoid further violence.