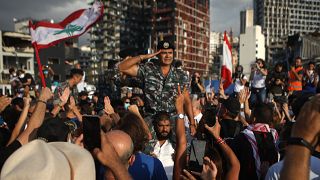 The city of Beirut marked one week since the catastrophic explosion that killed at least 171 people, injured thousands and plunged Lebanon into a deeper political crisis.

Thousands of people gathered near the devastated port, to remember those who died in the most destructive single blast to hit the country.

They observed a minute of silence at 6:08 p.m. local time, the moment on August 4 when thousands of tons of ammonium nitrate exploded in the city's port.

Some among the crowd chanted anti-government slogans while others held sign against their political leaders.

Danielle Manasseh expressed "anger" and "sadness", including for her friends "who lost people they love".

The explosion has fuelled outrage against top political leaders and security agencies and led to the resignation of the government on August 10.