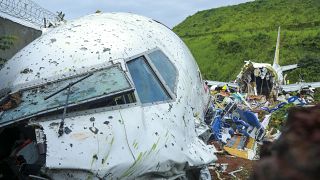 Survivors of a plane crash in India said the plane swayed violently as it approached a hilltop runway soaked by monsoon rain.

The return flight for Indians stranded abroad by the pandemic skidded off a runway in Southern India, nosedived and cracked in two, leaving 18 dead and more than 120 injured.

The dead included both pilots of the Air India Express flight, the airline said in a statement, adding that the four cabin crew were safe.

The two-year-old Boeing 737-800 flew from Dubai to Kozhikode, also called Calicut, in Kerala.

There were 174 adult passengers, 10 infants, two pilots and four cabin crew on board.

Kozhikode's 2,850-metre runway is on a flat hilltop with deep gorges on either side.

The Air India Express flight was part of the Indian government's special repatriation mission to bring Indian citizens back to the country, officials said.