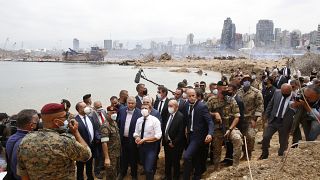 "Lebanon is not alone," he tweeted on arrival before pledging Paris would coordinate international relief efforts after the colossal blast killed at least 137 people, wounded thousands and caused billions of dollars in damage.

But Macron also warned that Lebanon — already mired in a deep economic crisis, in desperate need of a bailout and hit by political turmoil — would "continue to sink" unless it implements urgent reforms.

Public anger is simmering over the blast, caused by a massive pile of ammonium nitrate that had for years lain in a ramshackle portside warehouse — proof to many Lebanese of the deep rot at the core of their state system.

As Macron inspected a devastated pharmacy, angry crowds outside vented their fury at their "terrorist" leadership, shouting "revolution" and "the people want an end to the regime!"

"Come rule us!" one man yelled at the president.

Macron told them he would urge Lebanon's leaders to accept "a new political deal" and "to change the system, to stop the division of Lebanon, to fight against corruption".

Macron's visit to the small Mediterranean country, France's Middle East protege and former colonial-era protectorate, was the first by a foreign head of state since Tuesday's unprecedented tragedy.