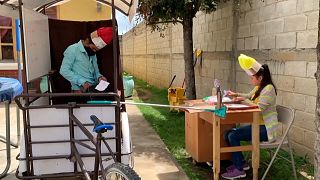 When the coronavirus saw Guatemala's schools closed in mid-March, teacher Gerardo Ixcoy invested his savings in a secondhand, adult tricycle.

But this was not just to get around — it also served as a mobile classroom with plastic sheets to protect against virus transmission and a whiteboard.

The classroom-on-a-trike was born of necessity.

Illiteracy in Ixcoy's area of Santa Cruz del Quiché is about 42% and in the entire province of del Quiché, only about 13% of homes have internet.

"I wanted to help them because they lacked technological tools, such as computers, printers, internet," Ixcoy said.

So each day, the 27-year-old teacher pedals among the cornfields of Santa Cruz del Quiché to give individual instruction to his sixth-grade students.

Ixcoy is known universally as "Lalito 10" — a childhood nickname that stuck.

For the children, the sound of the bicycle's bell announces the classes that break up the monotony of weeks in quarantine.

Ixcoy tries to visit each of his students twice a week using a mop to measure the distance between him and the child.

The pandemic has changed daily life significantly for Oscar Rojas, 11, "because now I'm not receiving normal classes", he said.

"Teacher Lalito only comes for a little while to teach me, but I learn a lot," he added.

Ixcoy recalls his students laughing when they first saw him pedalling into town, but he said the children soon realised he was there to help them.

"I believe they are my engine, the fuel to keep on pedalling to help them learn," he said.

"In the same way, they have taught me a lot: they are teaching me how to teach."