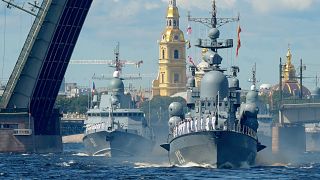 46 warships, boats and submarines, naval aviation aircraft and helicopters and over 4,000 personnel took part in the celebration of the Day of the Russian Navy in St Petersburg.

"This year 40 ships and vessels of different class will enter service, and several days ago six more vessels for the far-sea zone were laid down at Russia's three leading shipyards."

The aerial part of the parade consisted of more than 40 aircraft and helicopters, including the Be-200 amphibious aircraft.

The Kremlin has made military modernisation its top priority amid tensions with the West that followed Moscow's 2014 annexation of Crimea.

Similar parades marking Russia's Navy Day on Sunday took place in the Far Eastern cities of Vladivostok and Petropavlovsk-Kamchatsk, Sevastopol in the annexed Crimea, seaport towns of Severomorsk and Baltiysk and the port city of Tartus in Syria.

The modern Russian Fleet was created at the initiative of Peter the Great in the 17th century. However, the tradition to celebrate the Navy Day on the last Sunday of July dates back to the Soviet era, having been established only in 1939.

It was abolished in 1980 but then reinstated by Russian President Vladimir Putin in 2003.