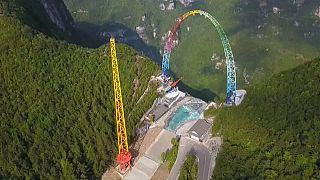 It is not for the faint-hearted - or anyone suffering from vertigo, for that matter. This is the world’s tallest swing, launched in China’s Chongqing municipality on Thursday.

The rainbow-coloured gigantic frame, which is near a 700-metre tall cliff at the Longgang Scenic Spot in Yunyang County, has been officially certified by the Guinness World Records.

The launching tower stands at 108 metres high, and the arch is a 100 metres tall.

Thrillseekers wearing harnesses lie horizontally next to each other three at a time and are lifted to a height of 88 metres. They are then swung over the cliff at a top speed of 130 kilometres per hour, according to engineers who also say it can withstand high winds of 165 km per hour and magnitude- 10 earthquakes.

It was finished late last year but was not able to open until now because of COVID-19 pandemic restrictions.