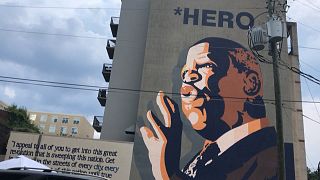 Atlanta residents gathered in front of a large mural of US congressman John Lew to pay tribute to the late civil rights activist.

Lewis served for decades as a US congressman, died aged 80 on Friday, July 17th.

The African-American icon was nearly beaten to death by police, and later as a sitting congressman was arrested multiple times for protesting genocide or leading immigration reform sit-ins.

Lewis was a sharecropper's son whose fights for justice helped define an era, and whose moral authority as an indomitable elder statesman left a permanent imprint in Congress.

He was diagnosed with stage 4 pancreatic cancer in late 2019.

White House press secretary Kayleigh McEnany tweeted on Saturday: "Rep. John Lewis was an icon of the civil rights movement, and he leaves an enduring legacy that will never be forgotten. We hold his family in our prayers, as we remember Rep. John Lewis' incredible contributions to our country."

Lewis had clashed with President Donald Trump on multiple occasions -- boycotting his inauguration and citing Russian interference in the 2016 election to question his legitimacy.

Trump, in turn, said Lewis's Georgia district was "horrible" and the congressman was "all talk" and "no action."

In a statement announcing he was ordering flags lowered to half staff at the White House and other public buildings and embassies for a day, Trump's only mention of Lewis was to say he was acting "as a mark of respect for the memory and longstanding public service of Representative John Lewis, of Georgia."

He tweeted later: "Saddened to hear the news of civil rights hero John Lewis passing, Melania and I send our prayers to him and his family."