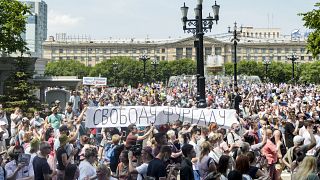 Tens of thousands of demonstrators in the Russian far eastern city of Khabarovsk took to the streets on July 18, protesting against the arrest of the region's governor on charges of involvement in multiple murders.

Local media estimated the rally in the city 6,100 kilometres east of Moscow attracted more than 15,000 people.

It is the second large-scale protest in the region over the past seven days, following a rally in the city centre last Saturday.

Both demonstrations are reported to be the largest in the history of Khabarovsk, a city with a population of 590,000.

Khabarovsk Governor Sergey Furgal was arrested two weeks ago and flown to Moscow where he was put in jail for two months.

Russia's Investigative Committee says he is suspected of involvement in several murders of businessmen in 2004 and 2005 before his political career began.

Furgal, a member of the nationalist Liberal Democratic Party, was elected governor in 2018 after winning over the Kremlin-backed incumbent candidate.

Furgal has denied the charges that date back to the period before he launched his political career when he was a businessman with interests ranging from imports of consumer goods to timber and metals.